Following our memoir, Beer in the Bilges, Sailing Adventures in the South Pacific, comes a novel incorporating some of the personalities we met in our travels, and whose true identities we couldn’t reveal.

Read excerpts from the draft manuscript of Two if by Sea, by clicking on the links below.

We would love to hear your feedback, so please leave a comment in the box.

And tell us if you would like to know when we launch the book by using the Contact Form at the bottom of the page. 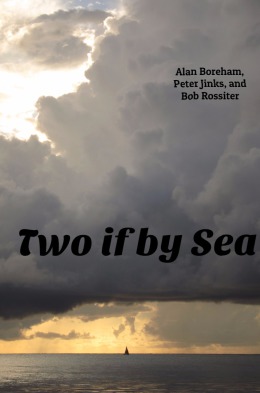 The 2008 Beijing Olympics were meant to showcase China to the world. Athletes came from 204 countries to compete. A million and a half spectators came to see the spectacle.

Now a volunteer has fallen sick with avian influenza, one that can be easily transmitted. There is no vaccine. No cure. After only four days, people begin to die. Lots of people. Thousands of people.

China imposes a massive quarantine, but some people have already left Beijing, taking the virus home. To 204 countries. An overnight global pandemic.

There are only a few remote areas of the world that are not affected. One is an idyllic island in the vast South Pacific Ocean. People around the world are fleeing the chaos, looking for a sanctuary. How will the islanders protect their tiny paradise?

One sailor is called upon to help. That man is Commander Jack Becker, United States Office of Naval Intelligence. He’s on vacation. Maybe the last one of his life.

There are no entries yet.

Your form message has been successfully sent.

You have entered the following data: